The Four Lakes Council Boy Scouts Drum & Bugle Corps, currently known as the Madison Scouts, has a well-documented history of continuous operations since February 3, 1938. However, recent research efforts of historical archives has uncovered evidence that the corps originated on December 3, 1920 under the direction of Lewis Kessler and maintained an active performance schedule through the end of 1925. 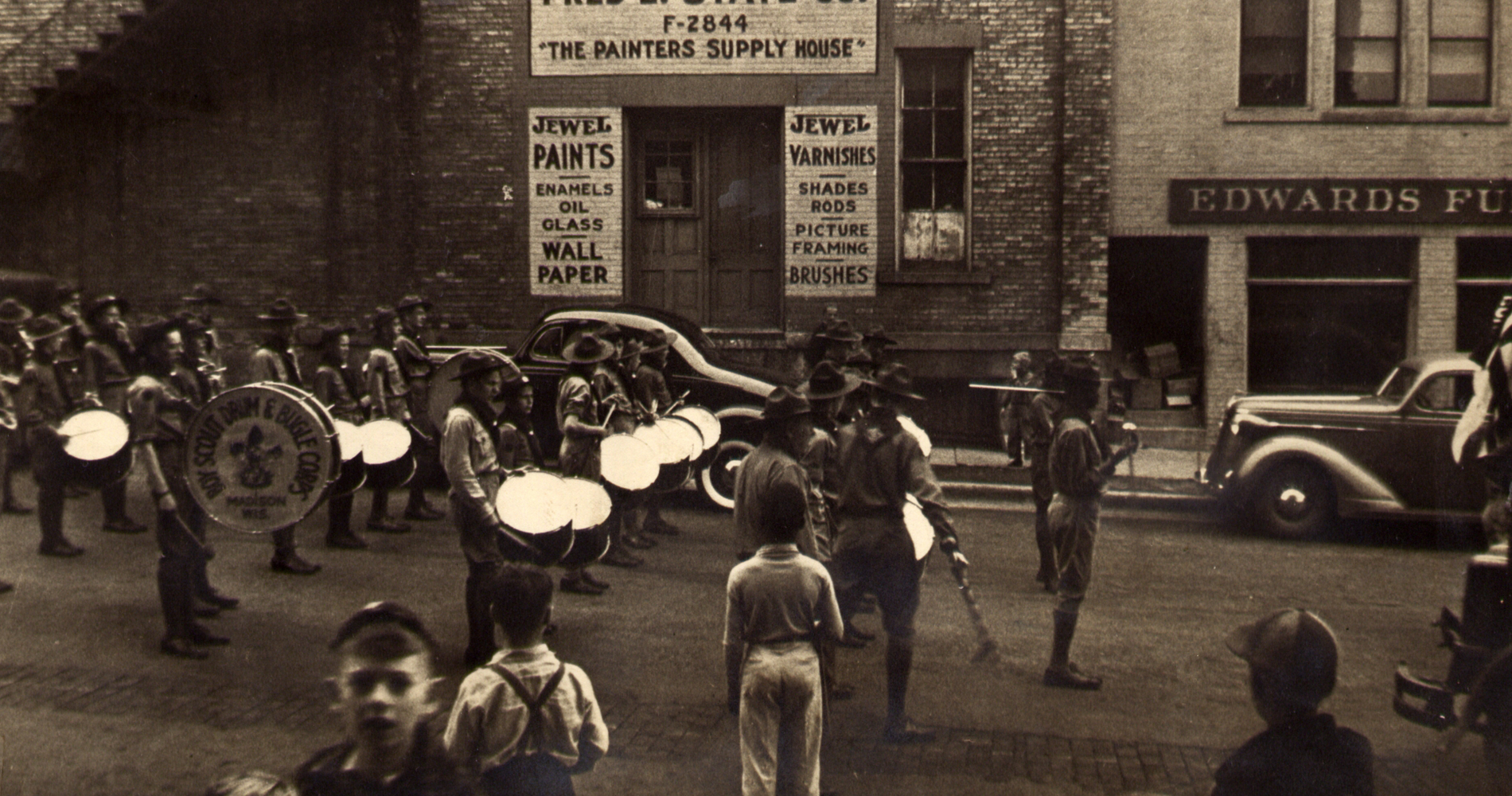 The Four Lakes Council Boy Scouts Drum & Bugle Corps, currently known as the Madison Scouts, has a well-documented history of continuous operations since February 3, 1938. However, recent research efforts of historical archives has uncovered evidence that the corps originated on December 3, 1920 under the direction of Lewis Kessler and maintained an active performance schedule through the end of 1925.

Leadership changes in the Council combined with flagging participation in Scouting resulted in the corps activity being paused in the fall of 1925. Attempts were made in 1928 and 1930 to restart the corps but to no avail, likely hampered by the Great Depression. A revitalization of the Council began in 1935, which saw the return of Lewis Kessler's involvement.

In October 1937, the Four Lakes Council began to actively recruit members to restart the corps. The 1938 redux would have E.J. Hess as its director and C.H. Beebe as its executive director and the advisory committee to guide the musical unit included none other than Lewis Kessler, the original corps director.

On October 20, 1919 Scout Executive, Ray O. Overholser, moved to Madison from South Bend, IN to "grow the Scout movement". After significant recruiting and campaign efforts, Overholser had grown Scouting to 20 troops and 400 participants by October 1920.

Lewis H. Kessler (1900-1974), former Navy Bugler and engineering faculty member at the University of Wisconsin, began his service to the Boy Scouts in 1920, and was soon promoted to Assistant Executive. On January 1, 1922, the Wisconsin State Journal reported the following about Kessler and the formation of a Scout Drum and Bugle Corps.

"The scout drum and bugle corps was organized Dec. 3, 1920, under the direction of L. H. Kessler, student at the university and now assistant executive. Within a year 39 boys have become members of the corps and not one of those was able to play either instrument before he became a member. Practically each troop sent a drummer and a bugler and many troops had more applicants for the cherished positions than could be supplied with instruments.

The first public appearance of the drum corps was in the Memorial day parade of May 30, 1921. The corps also played at the annual dinner of the Madison Scouts and served in the First Aid week in November. In addition, buglers have done good turns by sounding calls in patriotic exercises and at funerals of old soldiers."

Kessler directed the corps through a number of local performances from 1921-25, including:

In early 1925, Overholser resigned from his post and was replaced by Arthur W. Siemers. The corps continued to perform throughout the transition, but appears to have fizzled out near the end of the year. Much speculation is to be had regarding why the corps did not continue their busy performance schedule, but it appears that Siemers' focus on individual troop programming may have resulted in the multi-troop corps losing traction.

Lewis H. Kessler continued to serve the Scouts in various capacities during Seimers' tenure, but was not identified in either of the corps revival efforts led by Seimers in 1928 or 1930.

In January of 1934, Siemers was given a temporary leave of absence by the Four Lakes Council executive board until they could formulated a new financial program. Membership in the Madison Boy Scouts had dropped from 871 in 1930 to 274 in 1932, even though over 2,100 boys in the Madison area were eligible to participate. The falling participation numbers, the Council's organizational challenges, and the economic and social climate of The Great Depression required significant changes be made by the Four Lakes Council.

In 1935, A. N. Ekstrand took Executive office, and Lewis Kessler was elected to the Commissioner position in the Four Lakes Council, a significant leadership role. By 1936, Ekstrand built Scout membership back up to 518, and had a goal of 1,000 by 1940.

E.J. Hess, Chairman of the Activities and Civic Services Committee and future 1938 corps director, is first mentioned in The Scout’s Journal publication on April 19, 1936. He is also noted as a member of the Camporal Committee alongside Kessler.

C.H. Beebe makes his first appearance in a June 7, 1936 article. He and 30 other men (including Kessler) drove to Camp Tichora in Green Lake, WI to put in a new dock and to paint. These three men, particularly Kessler and Hess, interacted often from 1936 through the 1938 corps reformation.

The first mention of the reformation of a drum corps comes in an October 3, 1937 article:

“Madison will soon have its own drum and bugle corps. A committee right now is working on plans for a corps similar to the Racine outfit which visited the Rally last winter. Watch this column for the call for musical--more or less--recruits.”

In a January 23, 1938 The Scout’s Journal article, key corps committee members are named:

“Neighbors of certain Boy Scouts may not be happy about it, but Madison Scouts are going to have their own drum and bugle corps soon. Selection of the lucky fellows will be announced next week according to word from the committee Friday. E.J. Hess is director, assisted by C.H. Beebe. Musical director is E.F. Gottchalk. Advisory committeemen are R.H. Gerry, Prof. L.H. Kessler, and R.L. Hesse. Ask your scoutmaster how you can join. Instruments are furnished.”

Lewis Kessler, director from 1920-25, was directly involved in the reformation of the corps in 1938, serving an advisory role and resource for E.J. Hess and C.H. Beebe.

Discovering this new history of the Madison Scouts has been a fascinating journey and will continue. Anybody who has additional information regarding Lewis Kessler, 1920-37 corps operations, or related history should contact David Lofy at director@madisonscouts.org or Chris Komnick at ckomnick@madisonscouts.org