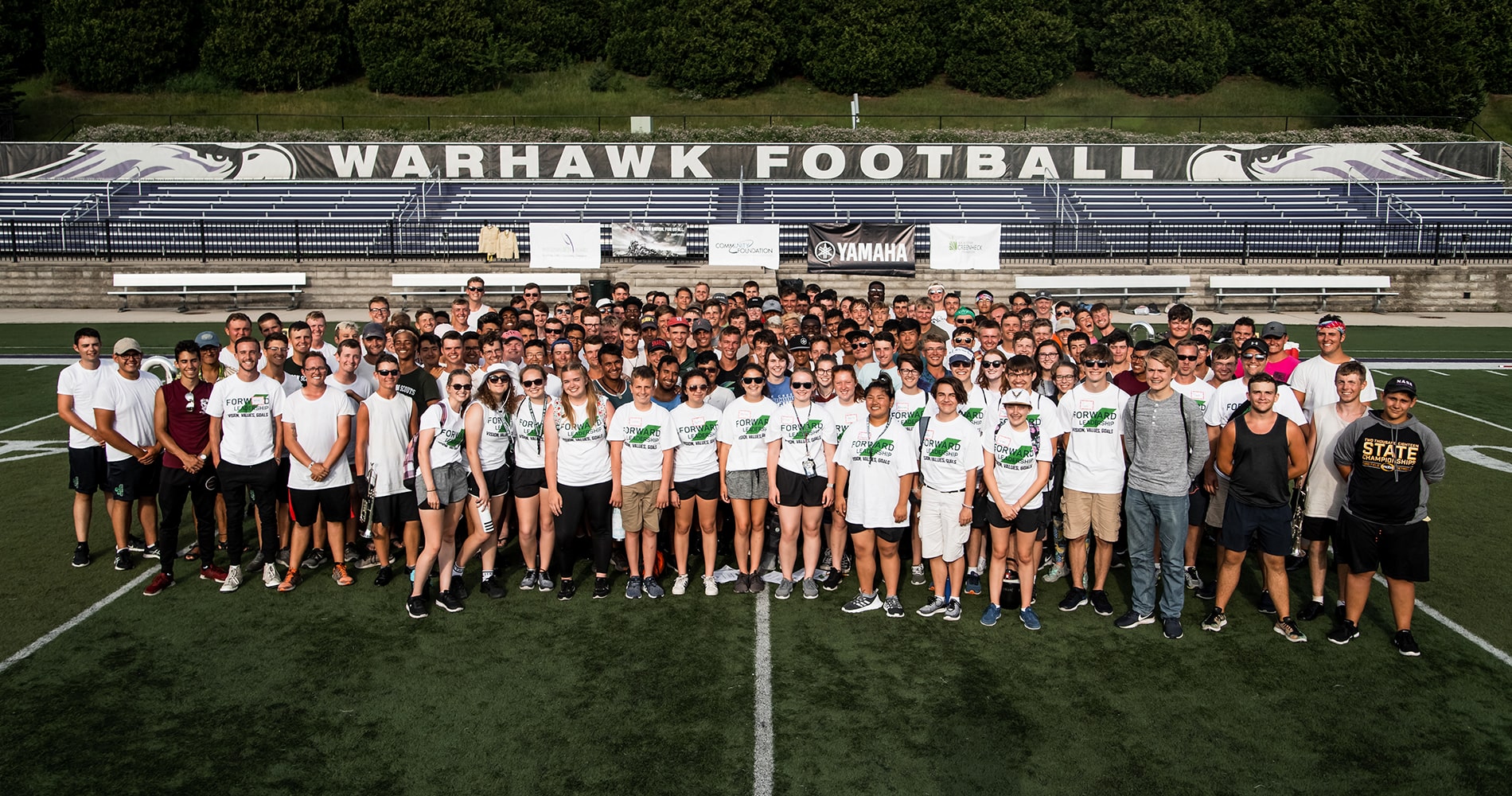 History and Foundations of Forward Leadership

Throughout their history, the Madison Scouts have lived out the core value of 'service'; service to their community, to each other, and to those they perform for each night. Whether it's leaving a housing site cleaner than they found it or bringing the Allentown audience to their feet, the Scouts have existed to serve others. When Forward Leadership was formed it was with service and the many values taught by Madison Scouts leaders from the past in mind.

Forward Leadership began formally serving the Madison Scouts in 2015, with the primary goal being: to provide every member, regardless of title, with high-quality leadership education. To achieve this goal, corps staff hosted leadership sessions during the camp season and summer tour to help build each member build their skill-set. Once equipped with these tools, members would put them into practice during rehearsal and beyond.

In addition to providing leadership education to the drum corps, Chris Komnick and Dann Petersen believed that this program would have value to band programs and their local communities across the country. Since its creation, Forward Leadership has provided numerous leadership clinics to high school and college bands.

As the program expands to serve more students, hiring leadership educators to help create curriculum and facilitate classes has become essential. Jason Robb has joined the team as the Educational Director and is responsible for guiding curriculum development and delivery. Katherine Willer, Rachel Montanez, and Ryan Ellis will serve as the team's primary Leadership Educators.

Forward Leadership continues to reimagine how leadership functions in the drum corps activity and the Madison Scouts. We strive to empower all of our members to take ownership of their culture and the learning process, to recognize the inherent value of every person, and to strive to serve their community through meaningful action.

The 2021 curriculum which was developed exclusively for the Madison Scouts and MadU Virtual Learning is now available to schools and businesses. Participants will be guided through various learning experiences that focus on:

Those who participate in Forward Leadership are empowered to take ownership of developing positive, healthy culture within their organization. In addition, participants are equipped with the tools they need to take an active role in everyday learning or work processes.

Forward Leadership is tailored for delivery at school organizations, non profit leadership, and business leadership to maximize the team's effectiveness through empowerment and positive culture. Our leadership educators will work alongside you to determine which lessons will be most relevant for your group. Live and virtual instruction options are available for booking year-round.

Jason Robb is a freelance drill writer, pageantry designer, and educational consultant living in the suburbs north of Austin, Texas with his wife Jackie and son Joseph. He received his Bachelor’s of Music in Education and Trumpet Performance from Sam Houston State University in Houston, Texas.

Before transitioning to pageantry design full-time, he had a successful career as a band director in Texas. He began his career teaching middle school band in The Woodlands for 5 years. In 2013, Jason relocated to Cedar Park, Texas as an Associate Band Director at Cedar Park High School, capturing a UIL Texas State Marching Championship in 2015. In 2016, Jason accepted the position of Director of Bands for Rouse High School in Leander, Texas. Under his direction, the Rouse program has been a Bands of America Regional Finalist, Regional and Super Regional Class Champion, and 5A UIL State Marching Championship Finalist. Jason was named the Phi Beta Mu Texas Young Bandmaster of the Year in 2018.

From 2008 to 2014, Jason served on the instructional faculty of the Madison Scouts from Madison, Wisconsin. Jason returned to Madison to serve as the Program Coordinator in 2020. He spends his non-drum corps summertime designing and coordinating marching band productions, writing marching band drill, and consulting with band programs all around the country. Jason also serves as the Educational Director for Forward Leadership, a program offered by the Madison Scouts and a leadership facilitator for SASi leadership based in Austin, Texas.

Katherine Willer is a band director living in Austin, Texas. She graduated with honors from the University of Houston in 2018 with her Bachelor’s of Music Education. While at the University of Houston, Katherine was a drum major for the Spirit of Houston Cougar Marching Band. She was also president of the UH chapter of the National Association for Music Education and a member of Kappa Kappa Psi, National Honorary Band Fraternity.

Following graduation, Katherine moved to Cedar Park, TX to work as an Associate Band Director at Artie Henry Middle School in Leander ISD. At Henry, she is responsible for teaching the Symphonic Band, Beginner Flute, Beginner Clarinet, and Beginner Double Reed classes. She also assists with the Concert and Honors Bands.

Rachel Montanez is a freelance graphic designer, colorguard director and choreographer based out of Long Island, NY. She received her B.S. in Mathematics from Molloy College in Rockville Centre, NY.

Rachel was introduced to the marching arts activity at Mineola High School, where she participated in both the marching band and winterguard programs from 2008-2012. Post graduation, her performance career continued with The Cadets from 2013-2015, Alter Ego in 2013, 2017-2018 and Fusion World in 2019.

Although Rachel’s passion for performing came first, she has been able to pass on her love for the activity through teaching. She’s had the pleasure of teaching and choreographing for various scholastic programs including Mineola High School, Oñate High School and Scholastic Open Class Finalist Dartmouth High School. Her drum corps teaching experiences include, the Oregon Crusaders and the Crossmen. Rachel’s current roles are at Hicksville High School where she is the Colorguard Director and at the Madison Scouts as a weapon technician.

As an educator, Rachel looks to empower her students with high expectations and positive reinforcements. She hopes for her students to gain a sense of ownership of their own learning that transcends far beyond a football field or gymnasium. She is looking forward to translating these ideas as a member of the Forward Leadership Curriculum Faculty.

Ryan Ellis is a freelance drill writer, battery arranger, and educational consultant living in Cincinnati Ohio with his wife Kayla. Ryan attended the University of Cincinnati where he received a degree in Business Management.

From 2013 to 2018 Ryan performed with Rhythm X out of Dayton Ohio. Ryan participated in DCI from 2012 to 2017 performing with Spirit of Atlanta, Bluecoats, and The Blue Devils Drum and Bugle Corps.

Before becoming a full time pageantry designer, he was the director of percussion for the Lebanon city school district. As well as working with many other Ohio ensembles, Ryan directed the Lebanon high school indoor drumline. Lebanon was a WGI world class finalist for the entirety of Ryan’s time there. Ryan has also worked with many independent ensembles including: Rhythm X, ConneXus, and The Crossmen Drum and Bugle Corps.

David Lofy serves as the Director of Programs for Forward Performing Arts and as Corps Director to the Madison Scouts Drum and Bugle Corps. He currently resides in Eau Claire, WI with his wife, Catherine. He received his Bachelor’s in Music Education from the University of Wisconsin-Eau Claire and Master’s in Music Education from the University of Illinois at Urbana-Champaign where he served as a graduate assistant to Illinois Bands.

From 2012-14, David performed with the Madison Scouts. Before his return to the Scouts as a member of the administrative team in 2017, he taught the Oregon Crusaders Drum and Bugle Corps from 2015-16.

As a life-long Wisconsinite and active member of its marching arts community, David is dedicated to increasing opportunities for students to participate in the marching arts and to provide key educational and leadership resources to educators around the state.

David will provide administrative and educational support to the Forward Leadership team, with a particular focus on the drum corps and Wisconsin-based leadership clinics.

If you are interested in hiring a Forward Leadership educator to provide servant-leadership based training that emphasizes self-realization, fostering healthy relationships, and lifestyle skill-building, complete the following form:

*All live clinics have been delayed until it is deemed safe to gather in person, but booking options remain available for both live and virtual clinics.

For answers to specific questions, contact David Lofy at director@madisonscouts.org.