​As an educator, Mack has taught many outdoor performance ensembles.  Previously, he has taught with the Carolina Gold Drum and Bugle Corps (2017-18), the Colt Cadets Drum and Bugle Corps (2018), and the Legends Drum and Bugle Corps (2019).​ Mack finished his student teaching at Cleveland High School in Clayton, NC.  During his time at Cleveland, Mack served as the brass educator for the Cleveland Arts Performance Ensemble Winter Winds, which took the WGI Winds World Class Championship title for 2019. Mack is currently the Band Director at Southeast Raleigh Magnet High School in Raleigh, NC and is excited to begin working with the Madison Scouts for the 2020 season. 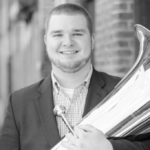