Dan Hoffman is a marching arts educator, choreographer, and designer based out of Mesa, AZ. Born and raised in Syracuse, NY, Dan graduated from the University of Rochester in 2015 with a Bachelor of Arts in Music and a Minor in Dance. His education is supplemented by ample performance experience, including three seasons as a contra player with the Boston Crusaders Drum and Bugle Corps.

As an educator, Dan began his career as a marching band visual instructor with his alma mater West Genesee High School in Camillus, NY. He then served as the drill writer and visual caption head for the Medford High School Marching Band in Medford, MA, from 2016-2018. During that time period, he was also a visual instructor with the Oregon Crusaders. 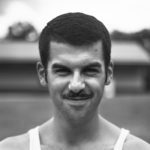