Trevor has been involved in the marching arts for over eight years. As a drum major in high school, he had the opportunity to attend leadership clinics such as SASi Leadership and Jones Leadership, where he learned many valuable leadership skills that he carries with him to this day. Trevor has attended the University of North Texas where he has studied Music Education. He was a member of the Green Brigade, Basketball band, and was principal trumpet of a university ensemble as well.

Trevor has worked with several ensembles throughout the North Texas area, such as Denton High School, Liberty High School, and most recently Poteet High School. Trevor has also enjoyed being able to travel and work with ensembles such as the Plainfield High School band in Indiana to help bring his knowledge of both music and visual pedagogy to the table. Trevor also leads visual programs for indoor groups such as the Poteet Indoor Drumline where they achieved several high rankings throughout the indoor season. Ensembles that Trevor has contributed to have gone on to receive superior ratings in music and visual captions. In the drum corps world, Trevor spent four years marching. He began his marching career with the Troopers in 2016. He went on to spend two more years with them, being section leader as well as being a marching member. Trevor aged out with Carolina Crown in 2019, when the hornline received its seventh Jim Ott award for high brass performance. Trevor enjoys teaching private lessons with beginner trumpets in the North Texas area as well. 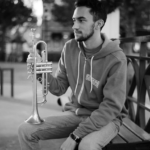