Travis Wade is a native of South Carolina and received his BA in Experimental Psychology from the University of South Carolina where his studies focused on motor movement learning and dance education. His involvement in the performing arts began at an early age as a dancer and continued through college where he founded Project Dance, a charitable dance company. Travis currently resides in Atlanta, Georgia, where he coordinates, choreographs, and instructs movement for several programs, including Hoover HS and the Paramount World Winter Guard. 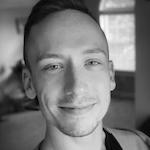