Sarah Rillo is a choreographer and consultant currently living in Tulsa, Oklahoma. She began her performing arts career in 2007 with the Pride of Broken Arrow from Broken Arrow, Oklahoma. After graduating in 2009, Sarah went on to perform with Crossmen in 2010 and 2011 and aged out of the Blue Devils in 2012. She also performed with Onyx World in their 2014 winter season and was given the opportunity to perform internationally with the Blue Devils International Corps for the 2015 season, touring several countries in Europe including Switzerland, Italy, the United Kingdom, and the Netherlands. Rillo was a part of the Maggie Allesee Department of Theater and Dance at Wayne State University in Detroit, where she was given the opportunity to perform in several pieces including a piece by Jarell Gordy, a professional dancer for the Detroit Pistons, as well as a piece by Ron Brown entitled “Dancing Spirit”, which was originally written and performed by the Alvin Ailey Dance Company.

Sarah began her teaching career after graduating high school in 2009. Since then, she has directed, choreographed, designed, or consulted for high schools around the U.S., for both their fall and winter seasons. Sarah has also acted as a technician and choreographer for different drum corps including Legends, Academy, Phantom Regiment, and Crossmen. Sarah is in her third year as a choreographer/instructor at Broken Arrow High School, as well as a choreographer for several other high school marching bands this fall. Outside of color guard, Sarah enjoys spending her free time watching Netflix and going on adventures with her fiancé, John, and her dogs, Elly and Neil. She is excited to be joining the team at Madison as they welcome in the first group of female performers. 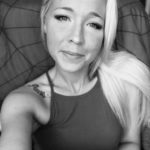