Noah currently lives in Canton, MI where he is the visual designer and consultant for the Plymouth-Canton Educational Park Marching Band. After marching with the Cavaliers in 1996, Noah went on to teach visual performance at Centerville High School. While serving as a visual specialist and caption head from 1997-2005, the band won 12 Bands Of America Regional Championships, as well as the high visual award at Grand National Championships in 2003.

Noah is the visual designer for WGI World Class finalists, Infinity Percussion as well as for the 2010 and 2011 WGI Open Class silver medalist, Stryke Percussion. Noah was also on the design team for The Troopers Drum & Bugle Corps where he served as the visual coordinator in 2013 and 2014 and the visual designer from 2015-2017.  In 2019, Noah served on the visual team for the Crossmen. He is a graduate of Indiana University and then earned a masters in jazz performance from the Cincinnati Conservatory of Music. 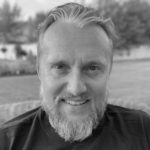