Matthew “Matt” Cocagne is currently enrolled as a music education student at the University of Michigan-Flint. While he has been enrolled, he has studied trombone and  performed with several of the university’s ensembles, including the Wind Symphony, Orchestra, Jazz Ensemble, Brass Trio, and Brass Ensemble, and currently resides as the treasurer on the university’s NAfME (National Association for Music Educators) chapter board. Matt has also worked as a freelance musician, being hired to play in several musical productions and holiday church services in the Flint area.

Matt has been teaching local marching ensembles since 2016. After graduating high school, he was hired by his alma mater, Grand Blanc High School, as a visual technician for the marching band. Since 2018 he has been working with the Flushing and Lake Orion marching bands as a visual and brass technician, as well as a choreographer. Matt has also been involved with the Grand Blanc Indoor Percussion Ensemble since 2016, who recently received the gold medal in WGI A Class.

Matt marched for three years (2015, 2017, 2018) in the Legends Drum & Bugle Corps hornline. He was also given the position of Horn Sergeant at Legends for the 2018 season. Matt completed the 2019 Drum Corps season in the hornline at Carolina Crown, ultimately culminating in receiving the Jim Ott high brass award. This will be Matt’s first year on the brass staff with the Madison Scouts and is excited to begin the 2020 Drum Corps season. 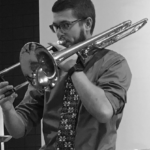