Recently, Mark relocated to San Antonio, Texas where he served as the Color Guard Director at Judson High School. While in Texas, Mark was also a part of the technical staff for Origins Color Guard (Austin, Texas). 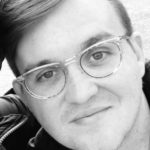